FALL DOWN, GO BOOM. NEVER GET UP AGAIN.  OH, LORD!

Most of our lives, we don’t think much about accidents. I mean, they happen once in a while, but they’re apt to be minor or they’re weird. Like a falling rock, or a patch of ice. Things are a little different after forty and really different after 60. For one thing, the accidents aren’t minor any more, they’re apt to be serious. For another, they happen all the time. And they aren’t weird: they are the norm.

In Younger Next Year, we say normal aging is a steady downward curve, starting at, say, fifty and ending when you go over the waterfall. That’s broadly right but if you get a bit more granular, you’ll see that in fact you go down in steps… some of them pretty big steps. Some of the biggest and most devastating steps are accidents. You’re one guy on Tuesday and then – Whammo!  you get knocked off your bike, you fall down the stairs, you trip on something stupid on the sidewalk. And you’re never the same again.

A “deconditioned” woman of 65 breaks her hip (the classic accident for an older woman).  There is a 50% chance she will never walk unaided again: it’s  the cane, the walker and the chair. AND there is a 20% chance she will be dead within a year.

Obviously not all accidents are as serious as that. But, as you get older, there are a lot of them, they are often serious. And they can have a huge impact on  your quality of life. If they don’t kill you.

Well, it’s obvious. If you don’t have a regular exercise program, you are going to lose 10% of your muscle mass a decade. By the time you’re sixty, you’ve lost 20-30% of your muscle mass. You are weak. And there are comparable declines in coordination, bone mass, balance and proprioception.   So… you’re going to trip a lot more. Going down the stairs or just down the sidewalk. (An older friend of mine came out of the movies, got her foot caught up in a blowing piece of plastic bag; fell and broke her hip. Damn near died.) And, because of the loss of muscle mass, you won’t have the strength to stop the fall or prepare yourself. You fall like an armload of sticks. You break stuff. In a fall you wouldn’t have had in the first place when you were 30.

Act of God, you may say…

… nothing to be done. Wrong. If you develop and follow a serious exercise program, you reduce those losses (of muscle and bone mass, coordination etc.) by half. Which leads to a 50% reduction in accidents. Is that enough to be important? Well, of course it is.

Here’s a little personal story to drive the point home. I am in my 80’s, I am walking my bike across a country road. My shamefully younger wife is right behind me and sees the whole thing. A dopey girl (almost certainly on her cell phone) comes over a rise but has plenty of time to slow or stop for us. But she never takes her foot off the gas. She smacks me at 40 miles an hour. I feel as if I’ve been shot with a high-power rifle.

EMT’s are there in no time. Call the ambulance. Tell the hospital to warm up the helicopter because I am an old guy, I’ve had an horrendous smack and I have almost certainly broken my hip or pelvis and, most likely, injured internal organs. Need the copter to go to a hospital that can handle this kind of thing (our little hospital is good but it can’t handle stuff like this).

Short version: they took Xrays and did an MRI ( twice because they couldn’t believe the results the first time). I have to have a transfusion because the bruise has sucked up so much of my blood out of the rest of my body. But nothing is broken or injured apart from the mighty bruise. I am back on my bike in two weeks. All but incredible.

How Come? Glutes, man. I have great glutes (the big muscles in your butt). Most people my age … their glutes look like drapery: completely atrophied with misuse. I am a terrible athlete but I do strength training all the time, just like the ones in these videos. And my glutes are strong. They acted like shock-absorbers. If I were a normal guy with glutes like drapery, I’d surely have broken my hip and likely my pelvis. And had internal injuries and so on. Certainly never walk unaided again. And very possibly  dead, into the bargain. Instead, I was back on my bike in two weeks.

Do I want to do strength training, two or three days a week? Not particularly. Do I do it anyway? Oh, yes. Because I know how important it is. Not only to prevent accidents but to improve and preserve my quality of life in general. To keep me being myself, instead of a broken down old plop.

Strength training has more to do with how you feel and how effective  you are  – at sports, at walking up the stairs, at everything – than anything else you can do. Start now. Never stop. 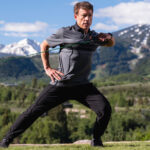 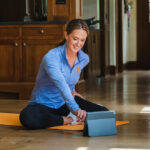 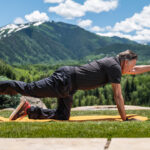 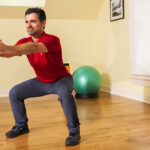 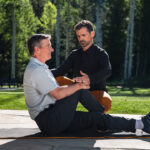